Lanka News HuntWe Know what you are Searching...
HomeOpinion
Opinion

Let us fight swiftly against repression for democratic rights 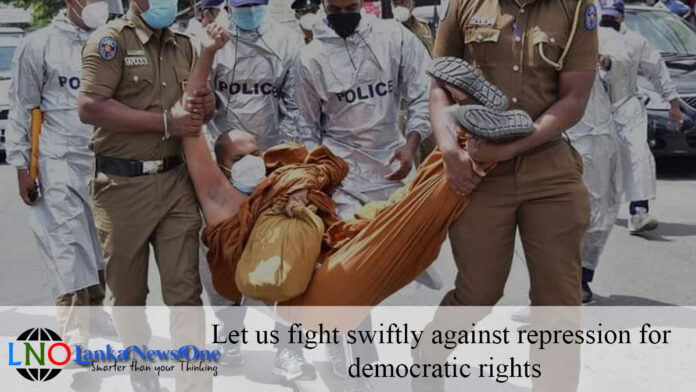 Although there is a need to enforce the quarantine law to control the Covid 19 epidemic, the government is now using the Sri Lanka Police to violate the right of the people to express their views and criticize the government’s arbitrary actions which is a totally unacceptable situation.

After the outbreak of the pandemic in March 2020, the government used the quarantine law as a repressive law to suppress the dissenting views of the people. We witnessed the most crucial repression done under this, yesterday. (7th July 2021) Protests that took place in Boralanda, Badulla over fertilizer problems faced by farmers, and Slave Island, Colombo against the non-payment of salaries to employees of the State Engineering Corporation were repressed by the police. After the protesters who were arrested in Slave Island were released on bail by the Colombo Fort Magistrate’s Court, the police had even forcibly taken them to the Pallekele Quarantine Center without a health inspector. The parties who organized the protests against the destruction of the Muthurajawela wetland at Ja-Ela, Bopitiya Junction and the protest in Kalutara, demanding the government to reduce the price of fuel and goods were also arrested under the quarantine law.Police also arrested a group of protesters in front of the Gandhi Park in Batticaloa yesterday demanding justice for Mahalingam Balasundaram, who was shot dead by a security guard of state minister Sathasivam Wijelandaran on June 21. It should be reiterated that it is a serious matter that so many such repressive incidents are taking place across the country in a single day.

The purpose of all these protests was to prevent the government from intervening in issues that affect the people and to protest against the decisions taken by the government to aggravate those issues.

The right to freedom of expression is recognized as a fundamental right in the Constitution of Sri Lanka, and also a number of Supreme Court rulings have also confirmed that citizens have the right to criticize the government.

Article 14 (1) (a) of the Constitution of our country states:

‘Every citizen has the right to freedom of speech and expression, including the right to express opinions freely.

Regarding the freedom of speech and prosecution in a number of cases decided by the Supreme Court, it has been stated as follows: In the judgment of Wanigasooriya v. Peiris (SC / FR / 199/87) it has been stated that the sharing of knowledge is also subject to freedom of speech. Wijeratne v. Perera (SC / FR / 379/93) has stated in his judgment that criticizing the actions of the state is also an acceptable act under freedom of speech. Judge Mark Fernando stated in the judgment: ‘Those who begin coercive elimination of dissent soon find themselves exterminating dissenters. Compulsory unification of opinion achieves only the unanimity of the graveyard. It seems trite but necessary to say that the first amendment was designed to avoid these ends by avoiding these ends by avoiding these beginnings.’

As the judge noted, if an attempt is made to suppress opposing views by force, the process ends in serious loss of life.

During the 2005-2015 tenure of President Mahinda Rajapaksa and Secretary to the Ministry of Defense Gotabhaya Rajapaksa, there were many instances of civilian casualties at the hands of the security forces in the repression of dissent. In a situation where those responsible for those incidents have been acquitted, under the rule of President Gotabhaya Rajapaksa, people are arrested, intimidated and kept in detention in the past, violating the right to freedom of expression through the Prevention of Terrorism Act and the Convention on Civil and Political Rights.

It is a serious matter to suppress the protests against the violation of the rights of the people by using the guidelines issued by the Director General of Health in accordance with the quarantine law to control the pandemic. In this case, the quarantine guidelines issued by the Director General of Health by the Sri Lanka Police are being seriously violated. It is also a matter of serious concern that the implementation of these quarantine laws is not seen in the affairs of the government and in the private affairs of those close to the government. There have been many such examples in the past confirming that law enforcement is arbitrary and biased.

We, the signatories below, believe that, the people should be mobilized, in order to defeat the rapidly growing anti-democratic actions of the present government and to protect the democratic freedom of expression and protection of fundamental rights of the people as a whole. We further suggest that all political parties, trade unions and mass organizations should unite and take the lead in staging a quick protest, regardless of differences.

This has been signed by 45 civil society organizations and trade unions. 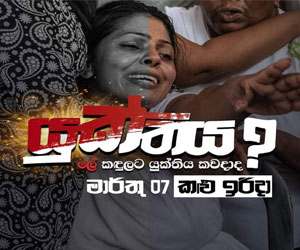